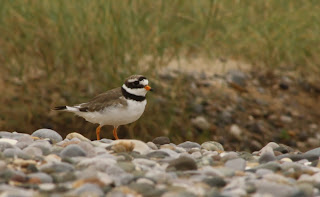 Ringed Plover: My final day volunteering at the Little Tern colony and yet no more attacks from the Kestrel and all is looking good. Geoff from the RSPB tells me that the colony on the Northern Isles and in Ireland have had disastrous breeding results, affected by the prolonged bad summer weather, predation and usually high tides. 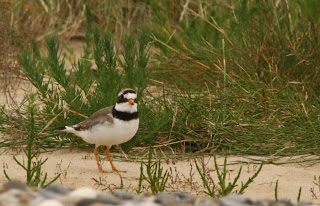 Gronant’s colony will have had bad results compared to previous years but im sure if you compare it to the other UK colonies if they have 60-40 successful fledglings then I would certainly view that as a positive result. 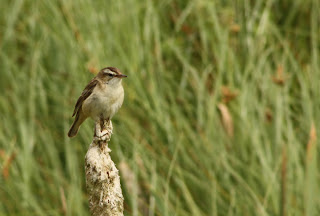 Sedge Warbler: The tide was out during my shift so didn’t see much in the way of sea birds but Ringed Plover can be found all over the site, many with young, one of which was sadly taken by the kestrel today.

Sedge and Reed Warblers where also seen on the salt marsh. 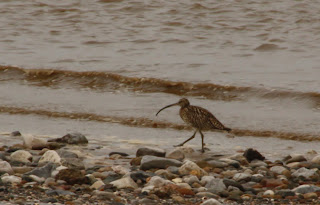 Curlew: There was a flock of about 30-40 Linnet on the salt marsh, a sighting of a Whimbrel and Natter Jack Toad reported by Andy the warden.

There was a huge mass of Oystercatcher on the tide line, I could hear Sandwich Tern but didn’t see any although I was pleased to see a fleeting glimpse of a Grey Wagtail heading towards Talacre.

And a single curlew was briefly seen along the tide line.
I would like to thank Wendy, Andy, Tom and everyone else I have spoken to while there for being very friendly and wish them and the Little Terns all the best. 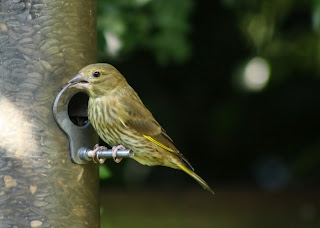 Green Finch: Took a trip to Thurstaston shore for a spot of sun bathing, the shore was quiet as the tide was in while we were there and we had our minds on the sunbathing and not the birds. We then walked up to on top of the Red Rock Cliffs and found a superb little bird hide, situated at the back of the visitor centre. 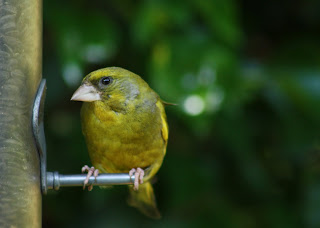 Green Finch: (male) This little gem was pretty standard a few bird feeders and perching branches but very close to the hide, much closer then Moore’s and Martin Mere Nature reserves feeding stations. The first birds to arrive were Green Finch there was a flock of about 9 many of which were juveniles and females, Great Tit was the next to arrive and then the House Sparrows turned up for a quick feed. 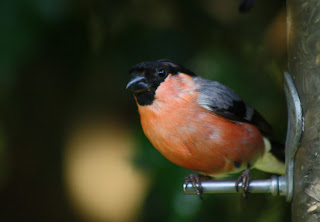 Bullfinch: A group of Bullfinch came flying in there was 2 males and 3 females, theses came very close to the hide to feed before flying off over the hedges. 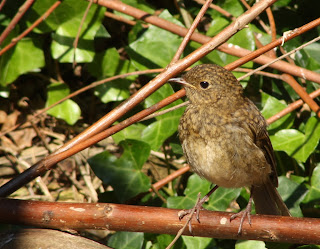 Robin: (juvenile) Other birds included a single Blue Tit a juvenile Robin, Wood Pidgins and Collard Doves, this place is fab and they had some pictures up in the hide of what birds had been seen, from brambling, Fieldfare and a stunning male Sparrowhawk so I would definitely recommend a visit if anyone is ever down on the beach sunning themselves.
Labels: Bullfinch, Green Finch, Robin 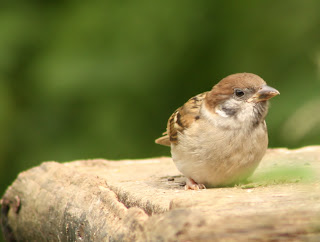 Tree Sparrow: Another visit back up to Lancashire where we started at Martin Mere hoping to catch a glimpse of a Barn Owl or a Marsh Harrier, although lady luck was not on my side as all I got was some Reed Bunting, Sedge, Reed Warbler and Oystercatcher along the reed bed walk. 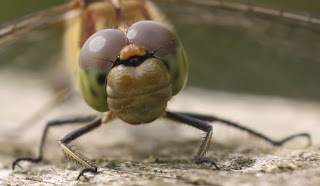 Common Darter Dragonfly: The one thing that was very interesting was the abundance and variety of Damselflies and Dragonflies, it was great just sitting and watching them dart and skim across the water and over the reeds. 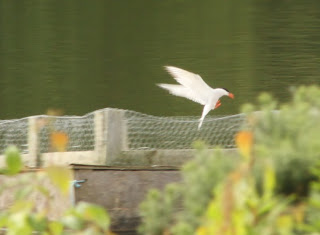 Common Tern: The surprise bird of the day was a single Common Tern sitting far out on a pontoon on the main lake at Mere Sands Wood Wildlife Trust Nature Reserve, It hung about in the sun for about 15 minutes before flying off over the tree line. Other birds included one female Tree Sparrow at the feeding station and a very distant and fast Kingfisher.
Labels: Common Darter Dragonfly, Common Tern, Tree Sparrow 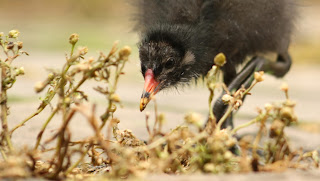 Moorhen: A quick morning stroll around Grosvenor Park reviled Blackcap, Chiffchaff, Goldcrest and plenty of Black Birds, I think this was because of the rain as they were all out paddling the grass looking for food.


The Moorhen chicks are doing really well I counted six as they where feeding out of the grass and along the side of the pond. 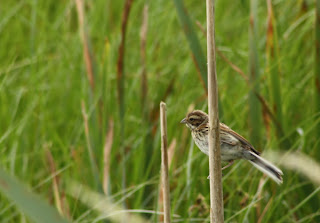 Reed Bunting: Another fantastic day with volunteering with warden’s at the Little Tern colony despite my bad throat and there were far more Terns here then last week.

We estimated around 200, I also spotted 6 Arctic Terns flying through the colony and Common Scoter flying low over the sea.


There were also 2 Grey Seals bobbing around in the surf just opposite where I was keeping look out for any birds of prey. Luckily this week I didn’t spot any and while I was there we had no attempted attacks on the Tern chicks.

Although worryingly I did spot a stoat in the sand dunes scurrying away from the fenced area, could this be a threat? Possibly, add it to the list, Foxes, Cats, Peregrines and the dreaded Kestrels.

The guys there are always looking for new voluntary wardens please get involved and make a difference.

It was my first day at the Little Tern colony at Gronant as Voluntary warden and the sun was out I was accompanied by some really nice people. I was given an introduction and was trained to learn how to listen out for the birds alarm calls and act when a predator came.

Myself and the other volunteer warden primary role o to deter the Kestrels which have been devastating the colony of late, if we dont help stop them this could be the worst year they have had since Denbighshire Council took over from the RSPB.

Within minutes of my arrival there was an attempted attack from tow Peregrines, how came in low and fast the Little Terns did most of the fending off but Wendy the senior warden went running and shouting toward the killer bird and it soon flew off out of sight.


An hour or so went by then suddenly there was more commotion as we spotted a female kestrel flying in towards the colony, Wendy did here usual thing of running off after the bird and me and another voluntary warden kept out eye on it as it came away from Wendy and flew around the back of us. I then ran off was frantically blowing my whistle, which had very little effect as the bird flew in low and fast and grabbed a Little Tern chick, feeling very disappointed the bird then flew with speed out of sight.

Stone Chat: (male) The people on the site are doing some amazing work and they think there is about 40 chicks still active but if the kestrel attacks continue they may end up with ZERO! Therefore there is an URGENT APEAL FOR MORE VOUONTARY WARDEND, anyone who has some free time please get in touch with Richard (Email below)

Sedge Warbler: Gronant is a stunning place it’s full of birds and orchids. As I was walking towards the colony I saw two Stone Chat a male and female, Skylark where everywhere and the odd Reed Bunting was spotted over the Reed Beds.

Although we didn’t want to see the Peregrines as they were attempting to take a Little Tern chick it was still nice to see two but the star bird has to be the 50-60 Little Terns.


Soldier Beetle: Marsh Orchids where everywhere looking stunning in the sunshine, with a quick change of lens I was able to get low and close and take this shot. The place was full of active Butterflies, Dragonflies and other insects bit many I was unable to Id.

Badgers: We had an AMAZING night out watching badgers with the Cheshire and Wirral Badger Group, we were taken to a local undisclosed location and saw four badgers, two of which were younger’s. Not quite cubes but big enough to scoff all the food in seconds.


This is an experience I would recommend to anyone, to get so close to wild badgers and see how they feed and interact with each other was simply awesome.

Now, I have been on a Badger watch before without any success where I was just sitting in the cold and the dark staring at a hole in the ground, but with The Cheshire and Wirral Badger Group we where treated to sightings within seconds of the food going down and they where around for at least 15 minutes.


I WOULD SERIOUSLY RECOMMEND ANYONE WHO MAY BE IN TO WILDLIFE OR NOT GET IN TOUCH WITH GROUP AND BOOK A VISIT. SEE THE LINK BELOW MORE MORE INFOMATION.
Thanks guys for a great night out.
http://www.wcbg.org.uk/ 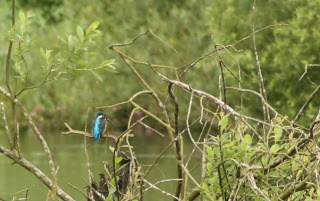 Kingfisher: This was all I could mange after a three hour wait on the side hide at Lapwing Lake, but i bet the guy who was next to me with his 800mm Canon lens did much better.

It’s not size what matters, it’s what you do with it that counts! 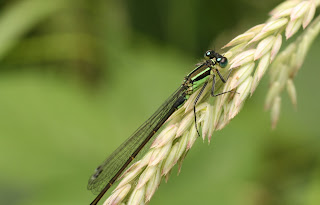 White Legged Damselfly: the whole of Moore is a buzz with Dragonflys and Damselfy, thsi was taken at the same hide just off Lapwing Lake. 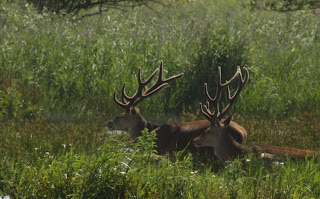 Red Deer: A visit to Leighton Moss with some friends and we saw a very rare sight, a huge orange thing in the sky, I think it was the sun, Hang on there are loads of flies, yes It must be the sun!

The sun did not just bring out the flies but four amazing Red Deer Stag! Theses laid back fellas where spotted walking across the lake at the Griesdale Hide, they seemed very relaxed as they made their way from one end to the other giving us stunning views. 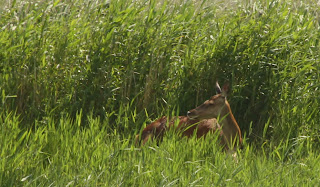 We then went across to Tim Jacksons Hide where again we were treated to more Red Deer, this time a group of females and one young buck. Here we also saw a female Marsh Harrier which we saw again sitting and preening on a perch far over the lake at the Lillian’s Hide. 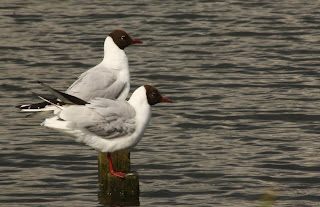 Black Headed Gull: Great Crested Grebe and more good views of female Marsh Harrier were had at the Public hide along with some gorgeous Marsh Orchids along the foot path.
Labels: Black Headed Gull, Red Deer 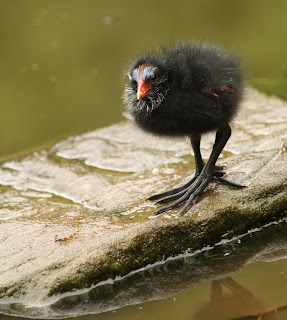 Moorhen: Great to see that the local Moorhens down on the park pond having another go at rearing young of which I counted nine chicks. I remember last time they all got picked off and each time I visited the number was fewer.


I also saw a pair of Goldcrests feeing, Chiffchaff and a male Blackcap in the same area. 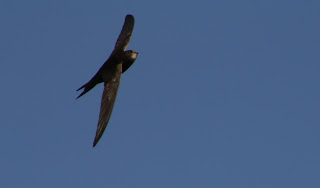 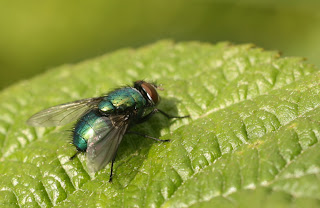 Common Swift: After yesterdays disappointing trip to New Brighton for a fruitless trip to see the Little Swift in the miserable rain, today has been a stark contrast. It has been bright and sunny and I was surrounded by Swifts, ok not Little Swift, Instead I had to settle for Common Swift, although still great to watch.

Blow Fly: I couldn’t resist getting the macro lens when I saw this spectacular little fly whizzing around.