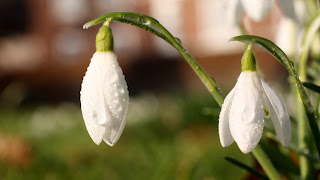 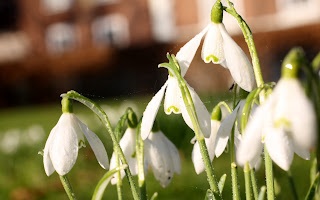 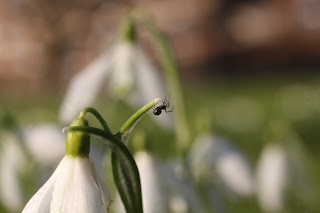 Money Spiders new home! Hope its not to chilly. 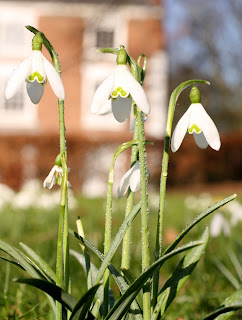 More Snow Drops, these are one of the first flowers to bloom and one of the flowers that to me is a sure sign that spring is on its way!
Labels: Snow Drops 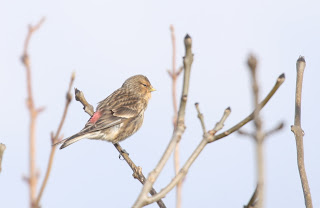 Twite: I think these birds are stunning, OK they are little and brown and some people may say they are just little brown jobs! 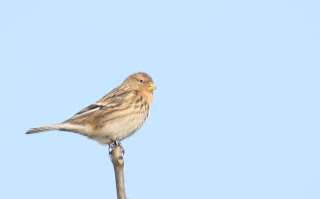 But they are great and they are rare, and thats what makes them that little bit more awesome. There was a man at Flint Castle roday from the BTO - he was one of the guys who had spent sometime ringing these birds on Snowdonia and claimed that this was probably the whole Welsh breeding population. 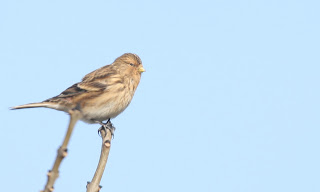 There were at least 50 birds seen on and around the castle today and they where showing really well.

When I first arrived they where loitering on the castle itself then they flew on the meadow where they were feeding.


I struggled at first to get a pic as they were so well camouflaged in the grass. Then I got lucky and they moved up in to the trees right next to the car park, BRILLIANT. 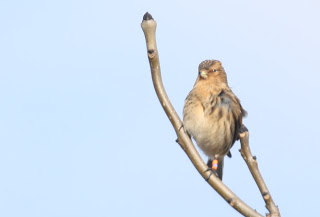 Some of the birds had colur rings and other silver BTO rings, the guy from the BTO asked me to send him any sightings of the rings spotted on the birds to kelvin.jones@bto.org if anyone else spots any please do the same, cheers.
Labels: Twite 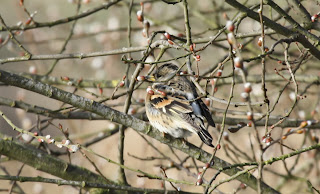 Brambling: Two inches to the left and I could of got a half decent shot of this male Brambling. Both male and female had been seen today on and around the feeders along with a dozen or so Siskin and two Bullfinch, and finally the weather was nice, Spring is on its way, the Bluebells are making a green carpet in the woods and we will soon have spring migrants here! Come on. 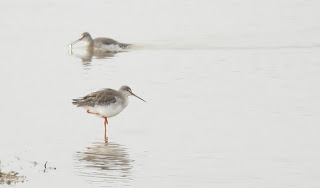 Spotted Redshank: There has been up to 5 spot reds at BMW for the past few weeks now, these are lovely slender waders which unlike their Redshank cousins feed on fish, as this pic shows. 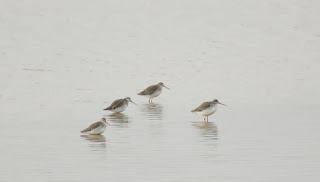 They have the most distinctive feeding pattern, theses tall birds will wade out in to deeper water with their heads constantly low down in the water, they will upend themselves to reach deeper water while paddling! When they catch a fish they will wade to the waters edge and gobble the fish whole! Brilliant behaviour to see, and a good guide to identifying them. 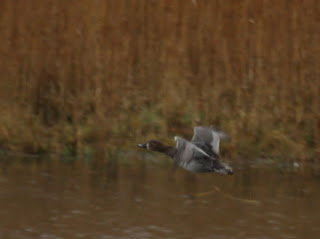 Pochard: The rain was relentless and the paths were a muddy mess but my trousers were worse! There were four Ravens in tank 5 along with two Buzzards worming in tank 5. Tank 6 has loads of common duck, Tufted, Mallard and Teal, but no sign of the female Scaup, not until I look over in the far border pool where it flew off or did it?


Dam!!! I should of treaded lightly if I had I might of got a better pic....and not disturbed the bird! It flew back in with the crowd of Tuffties out of camera range!
Was this a femle Scaup or a femle Tuffted Duck? I dont wanna tick it off without a firm ID. There has been a female Scaup there fo a while now! I did thinks Sacup at first and looking in Collins and online I still do....but I have a niggling doubt! 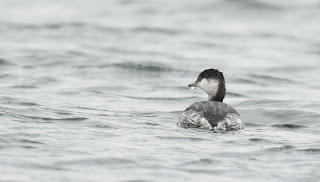 Slavonian Grebe: On a miserable grey, wet day I finally took the trip to Congleton’s Astbury Mere to see the Slav Grebe and I was not disappointed, the bird showed really well. 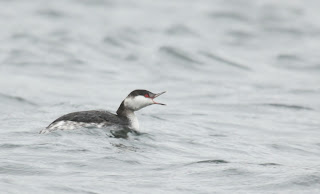 There was about four pairs of Great Crested Grebes a dozen or so Pochard and loads of Tuffties. 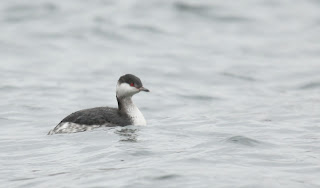 Through the rain and drizzle I was looking for the recently sighted Common Scoter and Scaup, but alas I was too late and the birds had left, the Scaup might have been long gone! So I decided to take a trip to Frodsham Marsh..... 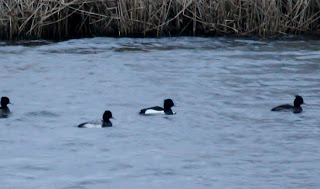 Lesser Scaup: I was tipped off yesterday by Stan the man who is a regular birder and volunteer at BMW but unfortunately I was a work so unable to go and see the bird. So the next morning Dawn and I took a quick trip across to Shotwick Boating Lake where I caught the bird on the nearby pool and thanks to Denzel, another local birder I got some cracking views! 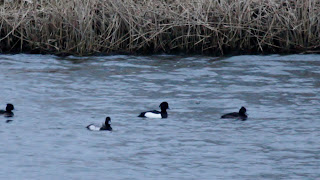 The bird was associating with our more common Tufted Ducks and stayed on the far side of the pool and I could only manage theses record shots.

This pic shows the subtle differences between Tufted Ducks and this Lesser Scaup, you can clearly make out its pale grey-ish back while Tufted have black backs, the Lesser Scaup is also rather smaller and lacks the tuft on top of its head which the Tufted Duck gets its name. Good YEAR and great LIFE tick! 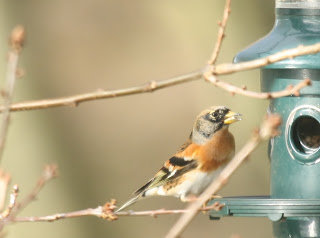 Brambling: I had some really good birds today at work, the highlight being this cracking male Brambling, it was feeding on the main feeder along with a female and a couple of Siskin. In the morning there was huge numbers of Pink Footed Geese with Colin counting 1700, a female Merlin made a dash a cross the scrape and there was 4 Spotted Redshank feeding on the scrape!

And people call this work!