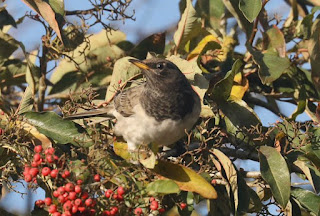 Black-Throated Thrush: Toady I was lucky to get some jaw dropping views of a very smart looking male black-throated thrush. The bird has been frequenting Whipsnade Zoo near Dunstable for the past few days. 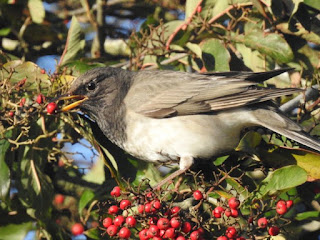 Patrick and I decided to try out luck and headed down the M6 early doors, but  having seen the 2016 St Asaph bird I didn't have the knot of anticipation we twitters get as we journey down to see a new bird. Patrick on the other hand was nervous. 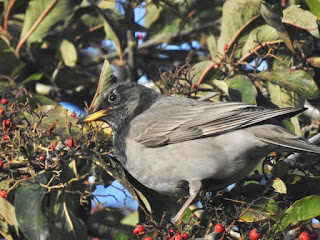 The previous day the bird had been illusive and disappeared by lunch time so we had only slight optimism. When we arrived the bird had been spotted on a grassy area opposite the elephant enclosure, we heeded here only to be told the bird had flown off 15 minutes ago! Disappointed we searched the area before noticing a large group of birders rushing off in the same direction, we swiftly followed. 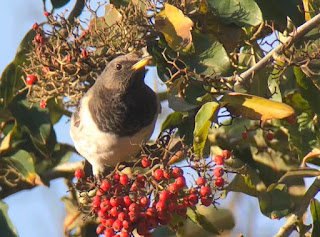 The bird was relocated outside the coffee shop near the pig enclosures, feeding on a cotoneaster tree. Here the bird put on a great show before flying off with a small flock of redwing.

Patrick and I were made up, especially as the bird sown so incredibly well. 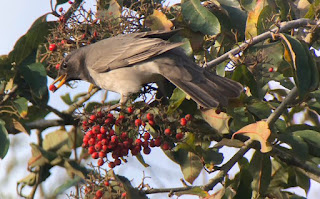 I suggest if anyone reading this is planning on going that you pre-book your entrance tickets (usually worth £26 discounted price £21.60) which are considerably cheaper and park in the over spill car park, as they charge you £12 to park within the zoo grounds. The over-spill is free. I would also like to thank Patrick not only for driving us down but lending me the two middle photos to use on my blog, quality mate.